The known history of Safranbolu, located in Karabük province in the north western Black Sea coast of Anatolia, dates back as far as 3000 BC. Once a city of Roman Province of "Paphlagonia", Safranbolu has hosted many civilizations including the Roman, Byzantine, Seljuk and Ottoman Empires throughout its history. During the Ottoman era the town served as an important junction on the Kastamonu - Gerede (in Bolu) - Istanbul route of the famous silk road. Safranbolu was at the same time a popular residence for Ottoman Royalty close to the Sultan and Grand Viziers. 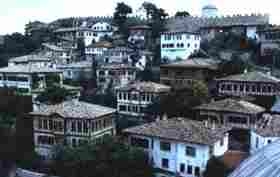 The city received its name from the saffron which is native in Safranbolu. The powder obtained from its flower is a very strong dye. Used in very small quantities, saffron adds a delicate flavor, distinct aroma and a very unique color to desserts and other food in the Turkish Cuisine. It is also used on some Turkish carpets as a unique dye. Also unique in Safranbolu is the famous Çavus grapes with its extremely thin skin and sweet flavor.

Safranbolu displays its extremely rich historical and cultural heritage through over one thousand architectural structures displaying a good example of Turkish architecture, all preserved in their original environment. These structures include the public buildings such as Cinci Hodja Kervansaray and Cinci Hodja Hamam, Mosques of Koprulu Mehmet and Izzet Mehmet Pashas, The Tennaries Clock tower, Old hospital premises, The guild of shoe makers, The Incekaya aqueduct, The old city hall and fountains as well as hundreds of private residences. Rock tombs and tumulus just outside the city are also of interest.

In 1994 Safranbolu was placed in the world Cultural Heritage list by UNESCO in appreciation of the successful efforts in the preservation of its heritage as a whole. Safranbolu deserved its fame for its typical houses. These traditional houses are perfect examples of old civilian architecture, reflecting the Turkish social life of the 18th and 19th centuries. The size and the planning of the houses are deeply affected by the large size of the families, in other words a total members of a big family living together in one house. The impressive architecture of their roofs have led them to be called as Houses with five façades. The houses are two or three storied consisting of 6 to 9 rooms, each room is entirely detailed and have ample window space allowing plenty of light. The delicate woodwork and carved wall and ceiling decorations, the banisters indoor knobs etc. all come together to form an unmatched harmony of architectural aesthetics and Turkish art.