Ottoman Sultans and their Dynasty

The Ottoman sultan was the absolute ruler of the territory. He was the head of the state and head of the government, and his words were the Law. He was the political, military, judicial, social, and religious leader. He was responsible only to Allah and God's Law, known as the Seriat (Sharia).

The Sultanate was inherited from father to the son during the early days of the Ottoman Empire. Sultan Fatih Mehmet, following the struggle for power between Yildirim Bayezit's sons for the throne, in the 15th century enacted the ruling of the murder of other siblings once the eldest was throned, in a decree (Ferman) named after himself. This application which was known as the "survival of the fittest" was enforced for about 250 years, until it was abandoned at the beginning of the 17th century and replaced with the rule of the "eldest family member" upon the death of a sultan. That is why after the 17th century a deceased sultan was rarely succeeded by his own son but usually by an uncle or brother. Also, all prospective future heirs to the throne were forced to live in the Harem's "cage" section, cut off from the rest of the world.

There were a total of 36 sultans who ruled between 1299-1922. The sultans of the Ottoman Empire, in chronological order, were: 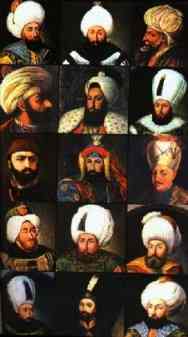 Vahdettin was the last sultan of the Ottoman Empire. In November 1922, Mustafa Kemal Ataturk abolished the sultanate, hence Vahdettin and his family were sent into exile in Europe. The sultan's descendants were not allowed to enter Turkey for about 50 years, when in 1974 the Turkish Grand National Assembly granted them the right to acquire Turkish citizenship if they requested. The last surviving heir to the past Ottoman throne, Mr. Ertugrul Osman, who was 4th in line to the throne, died in Istanbul on 23rd of September 2009 at the age of 97.