The Ottoman State and Government

The Ottomans inherited a rich mixture of political traditions from vastly disparate ethnic groups: Turks, Mongols, Persians, Mesopotamian and, of course, Islam. The Ottoman state, like the Turkish, Mongol, and Mesopotamian states rested on a principle of absolute authority in the monarch. The nature of Ottoman autocracy, however, is greatly misunderstood and misinterpreted in the West.

The central function of the ruler or Sultan in Ottoman political theory was to guarantee justice (Adalet in Turkish) in the land. All authority hinges on the ruler's personal commitment to justice. This idea has both Turco - Persian and Islamic aspects. In Islamic political theory, the model of the just ruler was Solomon in the Hebrew histories (Süleyman is named after Solomon). The justice represented by the Solomonic ruler is a distributive justice; this is a justice of fairness and equity that comes closer to the Western notion of justice. In addition, however, Adalet (justice) has Turco - Persian coordinates; in this tradition, Adalet, or justice, is the protection of the helpless from the rapacity of corrupt and predatory government. In this sense, justice involves protecting the lowest members of society, the peasantry, from unfair taxation, corrupt magistracy, and inequitable courts. This, in Ottoman political theory, was the primary task of the Sultan. He personally protected his people from the excesses of government, such as predatory taxation and the corruption of local officials. For the Ottomans, the ruler could only guarantee this justice if he had absolute power. For if he was not an absolute ruler, that meant that he would be dependent on others and so subject to corruption. Absolute authority, then, was at the service of building a just government and laws rather than elevating the ruler above the law as Europeans have interpreted the Sultanate.

In order to ensure Adalet, the Ottomans set up a number of practices and institutions in the central government surrounding the Sultan. The first was the establishment of a bureaucracy drawn from the Sultan's inner circle. This bureaucracy in turn controlled local governments; this would become the model of European absolutism in the seventeenth century. Other institutions and political practices were:

Observance of government: The Sultan's job was primarily to keep a watch on all the officials. In some cases, this observance of government involved the personal involvement of the Sultan. He would sometimes observe in secret the proceedings of the Divan, which was the central advisory group to the Sultan, and sometimes observe proceedings of Ulama courts. For instance, at about the same time that Martin Luther was condemned to death by the Diet of Worms, Sultan Süleyman secretly observed the trial of Molla Kabiz who asserted the spiritual superiority of Jesus Christ over Muhammad. After questioning by the Ulama court and refusing to recant, Molla was sentenced to death. Süleyman, however, overturned the verdict because the arguments the courts made had not disproved Molla's arguments (eventually, Molla's arguments were overcome in a later trial).

Periodically, the Sultan was required to tour local governments in disguise to ensure that magistrates and justices were operating justly. If the Sultan believed that an injustice was being committed against the people, he would interfere directly and overturn the decision. Islamic historians argue that the Ottoman Empire decline primarily because later Sultans took less and less interest in maintaining justice in their Empire. For the most part, however, the Sultan monitored local officials through a vast, complex, and elaborate system of spies who would report back to the central bureaucracy. The intelligence gathering system in the Ottoman Empire was the best in the world until the twentieth century!

Siyaset (Politics): Rooting out corruption meant nothing if nothing was done about it. Public agents and officials that abused their power and the peasantry were subjected to a special jurisdiction called the Siyaset. The Siyaset were a set of severe punishments imposed by the Sultan on corrupt officials; there was no way out, no cash compensation could take the place of the corporeal or, more often, capital punishments swiftly and severely meted out to corrupt officials. In the Siyaset system, the most severe crimes involved illegal taxation or forced labor of the peasantry, staying in their homes without permission or billeting troops without permission, and requiring peasants against their will to provide food for them or for soldiers. Such crimes almost certainly meant the death penalty.

Public declaration of laws and taxes: In order to prevent fraudulent taxes and arbitrary laws by public officials, the Sultanic "Orders" (Ferman) and taxes were declared and posted in public. There was, then, always direct dissemination of central government to the people directly.

Accessibility: Perhaps the most important aspect of Ottoman centralized government was universal access to centralized authority. The highest reaches of power - with the exception of the person of the Sultan - was available to each and every citizen of the Empire. Every single member of Ottoman society could approach the Imperial Council with grievances against government officials; these official petitions were called "ard-i mahdar" and were always treated with the utmost seriousness. If the Imperial Council ruled against the officials, they would often be subjected to the Siyaset.

Public opinion: The most common misconception about Islamic rulers in general and Ottoman rulers in particular was that they were removed, aloof, and uninterested in their people. While this may be physically true, it was not ideologically true. In fact, in the Ottoman state, public opinion was regarded as the only true foundation on which state authority rested. If the people ceased to support their rulers, it was argued, then the rulers would soon fall from power. The Sultanic government, then, assiduously cultivated public opinion, for it was recognized that the enemies of the Sultan were also cultivating adverse public opinion. The government did this not only through propaganda, but through policy as well. In addition to prosecuting corrupt government officials and publicly declaring taxes and laws, the Ottoman government also cultivated public opinion in its wars of conquests.

Soldiers were not allowed to mistreat peasants nor take anything from them without their permission or reimbursement. All the Ottoman wars of the conquest in the sixteenth century were assiduously planned years in advance. The government would lay up stores of supplies all along the campaign route so that the armies could feed themselves without taking anything from the general population. The Ottoman conquerors believed that no conquest could stand without the goodwill of the general population of the conquered, so military campaigns were remarkably fair and easy on the average person.

The Ottomans also paid attention to an early form of public opinion polling and were probably the first government to actively monitor public opinion through quantifiable means. The "opinion poll" that they used was the Friday prayers. In most Islamic states, one of the aspects of Friday prayer is to pray for the welfare and life of the ruler. This is an optional part of the Friday prayer, so its inclusion generally means that the members of the mosque think well of the ruler. Its omission frequently means the opposite. The Ottomans paid very strict attention to Friday prayers throughout the Empire in order to precisely gauge public sentiments.

The Structure of Government 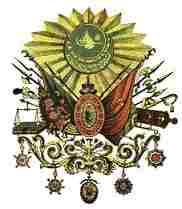 Officially, the Sultan was the government. He enjoyed absolute power and, in theory at least, was personally involved in every governmental decision. In the Ottoman experience of government, everything representing the state government issued from the hands of the Sultan himself.

The Sultan also assumed the title of Caliph, or supreme temporal leader, of Islam. The Ottomans claimed this title for several reasons: the two major holy sites, Mecca and Medina, were part of the Empire, and the primary goal of the government was the security of Muslims around the world, particularly the security of the Islamic pilgrimage to Mecca. As Caliph, the Sultan was responsible for Islamic orthodoxy. Almost all of the military conquests and annexations of other countries were done for one of two reasons: to guarantee the safe passage of Muslims to Mecca (the justification for invading non-Muslim territories) and the rooting out of heterodox or heretical Islamic practices and beliefs (the justification for invading or annexing Muslim territories).

Historians simply can't agree on how the Sultanate was passed from generation to generation among the Ottomans. In the early history of the Empire, the Sultanate clearly passes from father to eldest son; in 1603, at the death of Ahmed I (1603-1617), the Sultanate passed to the brother of the Sultan. Still, the Ottomans did not seem to have a hereditary system based on primogeniture (crown passes to the eldest son) or seniority (crown passes to the next oldest brother). In both Turkish and Mongol monarchical systems, the passing of the crown is a haphazard affair. Both the Turkish and Mongol peoples believed that the crown fell to the most worthy inheritor. Each individual in the hereditary line, brothers and sons, were equally entitled to the crown. This meant that successions were almost always major struggles among contending parties. The Ottomans seem to have operated in a similar system. When a Sultan passed away, the crown, it was believed, fell to the most worthy successor (almost always the eldest son). Selim I had to fight for the Sultanate, but Süleyman was the only son of Selim and so inherited the crown without a struggle. Once a Sultan had assumed the throne, all his brothers were executed as well as all their sons - had Selim I lost his bid for the crown, Süleyman would have been killed. These executions guaranteed that there would be no future wars or struggles between claimants to the throne since all the contenders but one were out of the picture.

In the seventeenth century, Ottoman Sultans began to revise this practice and simply imprisoned their brothers - this is what permitted Ahmed I to be succeeded by his brother. Western historians point to this practice as one of the central reasons why the Sultanic government failed. Since the crown was falling to individuals that had been imprisoned much if not most of their lives, the Ottoman state saw a succession of mad Sultans and the corresponding increase in power of a corrupt bureaucracy.

The fundamental qualification for the Sultanate was the individual's worthiness to fill the position. The Ottomans believed that simple succession proved that the Sultan was worthy of the crown; however, the Sultan may grow old, feeble, or corrupt and thus lose his worthiness to serve as Sultan. Selim I came to the throne by deposing his old father, Bayezid II (1481-1512), who was too old to lead the army against external threats. When Süleyman had become an old man, his two sons, Bayezid and Mustafa, his favorite son, plotted to overthrow him. Faced with this treason, the old Süleyman had to execute them both and this seems to have broken his spirit completely.

The Ottomans followed the old Turkish and Mongol tradition of considering the Sultan's lands to be a joint possession of the Sultan's family. Accordingly, the Ottoman lands were parceled out to members of the royal family when each Sultan came to power. Conquered lands were considered the private property of the Sultan.

Although the Sultan was regarded as personally responsible for every government decision, in reality the government was run by a large bureaucracy. This bureaucracy was controlled by a rigid and complex set of rules, and the Sultan himself was constrained by these rules. At the top of the bureaucracy was the Divan (couch), which served as a cabinet to the Sultan for making decisions. The most powerful member of the Sultan's government was the Grand Vizier (similar to prime minister of our days) who largely oversaw all the executive functions of the government. Appointments to these positions were not arbitrary but followed strict rules.