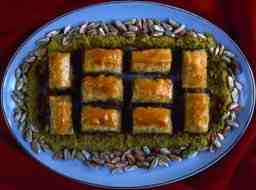 An old Turkish saying advises one to "eat sweetly and speak sweetly". Sweets and desserts have always been an important and distinctive element of Turkish cuisine. That was true in Ottoman times and is just as true today. Interestingly enough however, they also fulfill an important social and ritual function. Irmik Halvah, a confection made from semolina, is offered on the occasion of major changes in people's lives: a birth, a death, induction into the army, return from pilgrimage, upon settling in a new home, enrolling and graduating school; and also on special occasions such as praying for rain, etc.

One of the most important holidays in the traditional Islamic calendar is the one that marks the end of the 30-day period of daytime fasting during the month of Ramadan. A popular Turkish name for the Ramadan festival is "Seker Bayrami" (literally Sugar Holiday), which is a sort of capstone to the lavish desserts prepared for the sundown meals during the holy month. These desserts are elaborate not only in their ingredients but also in their visual impact and presentation.

The desserts and confections of Turkey bear witness to the rich history of its people's cuisine and geography. The dessert known as "Tavuk gögsü", made with the milk-white meat of chicken breast was introduced into ancient Rome from the Mediterranean and reintroduced into Anatolia by the Romans. The blanc mange made in Turkey and known as "Kazan dibi" must certainly be one of the loveliest parts of the mosaic that Turks have inherited from the ancient civilizations of Anatolia.

Then there's "Asure", a festive pudding of cereal grains, sugar, and raisins. According to a legend, it was originally concocted in the galley of Noah's ark from whatever was left in the pantry. The pudding is served traditionally on the tenth day of the month of Muharrem according to Islamic calendar, when preparing a batch of Asure and distributing it to neighbors and acquaintances is still a common custom in many areas. The Ottoman palace kitchens produced a refined version of "Asure" that was blended and strained; more common folk had to chew through the grains. They still do, to great enjoyment. Many different parts of the Ottoman Empire contributed their own local specialties to the palace kitchens where they were refined and transformed into a distinctively Ottoman - Turkish cuisine.

Turkish desserts usually fall into one of three categories:

Altogether there are about 25-30 basic recipes for desserts known but with the addition of local variations the number becomes enormous (around 200). In 1539 Suleyman I gave a huge feast to celebrate the circumcision of his two sons Cihangir and Beyazid. Archival records tell us that fifty-three different desserts were offered to guests including different- flavored and colored puddings, a variety of helvahs, pastries and cakes, and a large assortment of jams and compotes.

There is an interesting anecdote that brings together the elements of Turkish desserts and the Ottoman court. During a Ramadan in the early 19th century, Sultan Mahmud II decided to pay a surprise visit to the mansion of Durrizade Esseyid Abdullah Efendi in Istanbul just before the cannon-shot signaling the end of the fasting went off. By custom, he would have to be entertained there and Abdullah, a cultured intellectual as well as an accommodating and experienced host managed to take care of his unexpected imperial guest brilliantly, marshalling the kitchen of the women's half (known as harem) of the mansion to the support of the men's side. The individual courses were done to perfection and the service came off flawlessly all until it was time for dessert, fruit compote that arrived in a clumsy, ill-formed bowl. Appalled by the sight, the sultan asked those near him "So far everything has been served in crystal and porcelain and eaten with gold cutlery; what is that ugly-looking bowl doing here?". The host overheard this of course and immediately explained "Your majesty, my butler goes up to Camlica mountain every day to fetch drinking water from a particular spring. Rather than throw ice into the compote and risk spoiling its flavor, he fashioned a bowl of ice out of Camlica spring water."

The essence of traditional Turkish cuisine lies in the importance given to details be it an elaborate pastry or a simple stewed fruit.