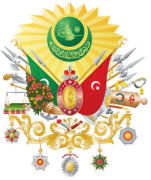 The typical military sign of the Ottoman Empire, known as "Arma" in Turkish, is formed by various (about 30) different elements all symbolizing something. This sign was used by the Ottoman infantry on the battalion banners. The sign was first used after Nizami-Jedid reforms, meaning "New Order" in Turkish, carried out by the sultan Selim III in the late eighteenth century.

Another version tells that this sign was first used during the Crimean War (1853-1856) when Ottomans fought against Russians. It's said that Queen Victoria, trying to establish good relations during the War with the Ottoman sultan Abdulmecid, had this sign designed and offered to the sultan together with an "Order of the Garter" (Dizbagi Nisani in Turkish). The weapons and the balance on the sign were added later by the sultan Abdulhamit II during the second half of the 19th century and became the official military sign.

It is not the State Coat of Arms of the Ottoman Empire, as the Empire did not use any unlike the Europeans did. Here is the meaning of the Ottoman Military Sign: