Legislative power in Turkey is vested in the unicameral Grand National Assembly (abbreviated as TBMM), consisting of 600 deputies elected every 5 years. Under the 1961 constitution, the Grand National Assembly was a bicameral parliament with over 600 members. The 1982 system represents an effort to avoid the imbalances and the challenges to leadership that occurred under the larger, two-house legislature. The number of deputies was dropped to 450, later in 1998 became 550, and finally in 2017 brought up to 600.

The legislative term has been lengthened by one year under the new Constitution in an effort to reduce the preoccupation with campaigning that had contributed to Turkey's political fragmentation in the past. For the same reason, by-elections to fill vacant seats are to be held only once between general elections unless the number of vacancies reaches 5 percent of the total assembly membership. General elections may be held earlier than scheduled if a majority of deputies so decides or if a prolonged parliamentary deadlock occurs, or after the referandum of 2017 if the president decides to.

The Grand National Assembly is to convene on the first day of September and may not recess for more than three months a year. During an adjournment, the president may summon the assembly for an extraordinary session, either on his own initiative or at the written request of one-fifth of the members. The assembly has the power to enact, amend, and repeal laws. With the referandum of 2017 it lost the power to supervise the Council of Ministers and to authorize it to issue governmental decrees. It debates and approves the budget and makes decisions regarding the printing of currency. In addition, the assembly approves the ratification of international treaties and has the power to authorize a declaration of war. Although the Constitution provides for legislative controls over the executive in the form of written questions, investigations, and interpellations, there are also procedures under which the parliament may delegate its lawmaking powers to the Council of Ministers, more precisely to the President after the referandum of 2017. 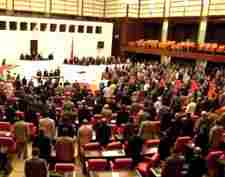 With the referandum of 2017, every Turkish citizen over the age of eighteen (before 2017 was twenty-five) is eligible to be a deputy, provided that he/she has completed primary education and has not been convicted of serious crime or been involved in "ideological and anarchistic activities". Male candidates are required to have performed the compulsory military service. Members of higher judicial and educational institutions as well as civil servants and members of the armed forces must resign from office before standing for election.

According to the Constitution, deputies represent the whole nation, not merely their own constituencies. A member of the Turkish Grand National Assembly wields more patronage and influence than the members of most other Western parliaments and is expected to intervene in the bureaucracy more actively and frequently.

Legislators are granted parliamentary immunities, such as freedom of speech and, with some qualifications, freedom from arrest. They can be deprived of their membership in the assembly by the decision of an absolute majority of its members. A deputy who resigns from his party may not be nominated as a candidate in the following elections by any party in existence at the time of his resignation.

Members of parliament have traditionally been a fairly young, educationally elite group; at least two-thirds of the deputies of every Grand National Assembly have been university educated. Whereas this has continued to be the case under the new constitutional system, there has been a shift in occupational representation away from a predominance of officials. A large portion of the deputies since 1983 have been lawyers, engineers, businessmen, and economists.

During the Coup d'Etat tentative of 15-16 July 2016 the Parliament building suffered damage by bombings from rough military aircrafts.