Osmaniye is a small town (974 square kilometers) in Southeastern part of Turkey, just north of the Gulf of Iskenderun of the Mediterranean Sea. It's one of the latest towns of Turkey as until recently it was a district of Adana, then it got the status of province in October 1996. Its population is approximately 534.000 (2020) and growing. 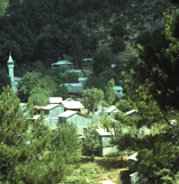 Osmaniye has a mild Mediterranean climate and is surrounded by fertile agricultural fields and forests where carpentry and woodworking once dominated the economy. Today the town is a processing center for the region's production of cotton, wheat, corn, soybeans, and pistachios. Kilim weaving also has a great value in some districts of Osmaniye.

Some if its districts are; Bahce, Düzici, Kadirli, Hasanbeyli, Sumbas, and Toprakkale. Today there are many sites of interests in the towns' city limits such as Kastabala Castle, Hemite, Frenk (Cardak), Toprakkale and Savranda (Kaypak) castles. There is also Zorkun high plateau just 26 kilometers (16 miles) to southeast of the city and Olukbasi high plateau just 16 kilometers (10 miles), both providing refuge from the intense summer heat of Cukurova plain and ample grazing for the domestic animals.

The lands surrounding the city was inhabited by a nation called Lelegs in the Calcolithic and Early Bronze Age. In the following centuries, Great Hittite State, Assyrian civilization, Roman Empire, Byzantine Empire, Seljuk's and finally Ottoman Empire reigned in the region.

At Karatepe National Park, 25 kilometers (15 miles) in Kadirli district, there is the Karatepe-Aslantas open air museum, which is a neo-Hittite site where you can find the remains of the summer residence of King Asitawada and tablets of Hittite and Phoenician inscriptions.

Devlet Bahceli, leader of MHP political party in the Turkish parliament, was born in Osmaniye.