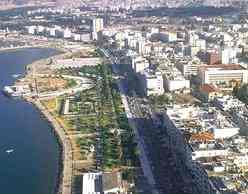 Iskenderun is now a busy commercial center and an important port of Turkey on the Mediterranean region. Once called Alexandretta, it was founded by Alexander the Great after his victory over the Persians. Iskenderun has an active, modern life with good hotels, restaurants and cafes among the palm trees by the Mediterranean sea, in a fine location on the shores of a deep bay and at the foot of high Amanos Mountains. The cuisine of Iskenderun is delicious, especially "Kunefe", a special dessert with cheese in it and eaten hot. Make sure to taste it. The best prawns can also be found here.

To the south of Iskenderun there is Ulucmar (Arsuz), a historical place and holiday town on the coast. You will benefit from the beautiful sandy beaches, sea and sun while you may do some water sports as well in one of the hotels or guest houses in a quiet atmosphere. As a contrast, on the way to Antakya there is mountain resort of Sogukoluk, which gives a good opportunity in summer months for a quite holiday.

On the way to Adana, you will pass through the large areas of fruit groves which provide all the orange, tangerine, and lemon needs of the whole country. Dortyol (the plain of Issos) is where Alexander the Great won over Darius II and Persians in 330 BC. In nearby Osmaniye there is a fortress at Toprakkale built by the Crusaders which is still impressive.

Nearby Iskenderun is Yakacik (Poyas) which preserves a splendid architectural example of Ottoman period dating back to the 16th century; the Sokullu Mehmet Pasa Complex with a mosque, bath, bazaar, caravanserai, and medresse in it.