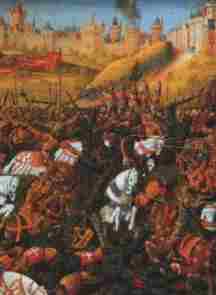 The success of the Seljuk Turks stimulated a response from Europe in the form of the First Crusade. A counter offensive launched in 1097 by the Byzantine emperor with the aid of Western crusaders dealt the Turks a decisive defeat. Konya fell to the crusaders, who compelled the Turks to provide them with reconnaissance on their march to Jerusalem. In a few years of campaigning, Byzantine rule was restored in the western third of Anatolia, and the crusaders carved out feudal states there and in Syria as vassals of the emperor.

A Turkish revival in the 1140's nullified many of the Christian gains, but greater damage was done to Byzantine security by dynastic strife in Constantinople (Istanbul) in which the largely French contingents of the Fourth Crusade and their Venetian allies intervened. In 1204 the crusaders installed Count Baldwin of Flanders in the Byzantine capital as emperor of the so-called Latin Empire (Imperium Romaniae), and the Venetian Doge Enrico Dandolo as the ruler, dismembering the old empire into tributary states where Western feudal institutions were transplanted intact.

Independent Greek kingdoms were established at Nicaea (Iznik) and Trebizond (Trabzon) and in Epirus from remnant Byzantine provinces. Turks allied with Greeks in Anatolia against the Latins; Greeks allied with Turks against the Mongols. In 1261 Michael Palaologus of Nicaea drove the Latins from Constantinople and restored the Byzantine Empire but as an essentially Balkan state reduced in size to Thrace and northwestern Anatolia.

Rum survived in the late thirteenth century as a vassal of the Mongols, who had already subjugated the Great Seljuk sultanate at Baghdad. Mongol influence in the region had disappeared by the 1330's, leaving behind gazi amirates that competed for supremacy. From the caotic conditions that prevailed throughout the Middle East, however, a new power emerged in Anatolia - that of the Ottoman Turks.