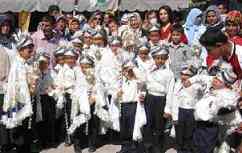 Circumcision means removal of the foreskin of the penis and is a universal practice which is greatly influenced by cultural and religious traditions, especially of the Moslems and Jews. It is the most frequent operation on males not only in Islamic countries, but also other parts of the world. For example, in the United States of America more than one million male infants are circumcised each year. The performance of circumcision is one of the rules of cleanliness in Islam. It is reported by Abu Hurairah that the Prophet Muhammed (Peace Be Upon Him) mentioned:

Five are the acts quite akin to Fitra: circumcision, shaving the pubes, cutting the nails, plucking the hair under the armpits and clipping (or shaving) the moustache (Recorded in Sahih Muslim, Sahih Bukhari, Musnad Ahmed and Sunnah At-Tirmidhi). The word Fitra in relation to cleanliness can refer to the Sunnah of the Prophet (pbuh) with regard to this matter, and Fitra also "implies an inner sense of cleanliness in man which is proof of his moral convictions and mental health".

The Islamic scholar Al-Mawardi said, "The ideal method is to remove the skin completely from the beginning of the glens, and the minimum condition is that nothing is left to cover the end of the glens". The Prophet Muhammed (pbuh) recommended performing circumcision at an early age. Al-Mawardi stated that the chosen time is the 7th day after birth, but it can be carried out up to 40 days after birth or thereafter until the age of 7 years, depending upon the health of the infant or child at the time.

There is an ongoing debate on the value of neonatal circumcision. Indeed, the position of the American Academy of Pediatrics since 1975 has been that there are no valid or absolute medical indications for routine circumcision of newborn male infants. On the other hand, the results of recent clinical and epidemiological studies are supportive of the practice of circumcision in newborn and infant males.

From a two-part study involving cohorts of 3,924 and 422,328 infants respectively Wiswell and Roscelli found a higher rate of urinary tract infection in uncircumcised compared with male circumcised infants. These investigators observed that as the circumcision frequency rate decreases, the incidence of urinary tract infections increases. Infection usually begins in the foreskin which becomes swollen and difficult to retract. A medium for bacterial growth and further spread of infection is provided by the fecal material trapped between the foreskin and glens of the penis. Such a condition probably leads to other more serious complications.

The cause for cancer of the penis is not known, but it is associated with related infections. According to current belief, cancer of the penis occurs less frequently among Muslims and Jews. Whether this is so and is a benefit of circumcision should be investigated in carefully controlled clinical studies. Foreskin complications are more common in uncircumcised children. According to the report of Herzog and Alvarez early circumcision of male infants protects them from these conditions. Proper hygienic care of the penis, which includes regular washing, will prevent some infections, but among children this is difficult to maintain and is probably not as effective as circumcision. Some conditions, such as phimosis, often lead to circumcision at a later age that could have been prevented if it had been performed earlier. The possible risk for long term urological complications in the infected, uncircumcised male infant has not been properly studied. It is known, however, that as many as 50% of male infants with urinary tract infections will subsequently reveal demonstrable radiological abnormalities. Thus, the performance of circumcision and the practice of Sunan Al-Fitra as recommended in Islam is medically beneficial and reflects the wisdom of the Islamic statements.

There is no evidence of any long-term psychological harm arising from circumcision. The risk of damage to the penis is extremely rare and avoidable by using a competent, experienced doctor. Surgical methods use a procedure that protects the penis during excision of the foreskin. As an alternative, for those who might prefer it, a device (PlastiBell) is in use that clamps the foreskin, which then falls off after a few days, and so eliminates the need to actually cut the foreskin off. For some, cultural or religious beliefs dictate the method.