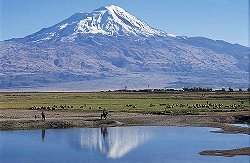 Agri province is situated in Eastern Anatolia extending to the Iranian border. It's one of the highest regions in the country with its mountainous formation.

Mount Agri (Ararat) is the highest peak of Turkey rising up to 5,165 meters (16,945 feet), and is the symbol of the city. This snowcapped dormant volcano is the famous biblical Mount Ararat, the legendary site of the second beginning of the world. It is believed that Noah's Ark rested on its summit during the big flood, and the wide plain of Igdir at the foot of the mountain is the first place where Noah set foot after the disaster. A geological hollow near Uzengili village has the shape allegedly of the Ark, and it is a place often visited by tourists, being also a beautiful resting spot. Mount Ararat, besides offering magnificent scenery, also provides sportive opportunities for hunting, skiing and mountaineering. Climbing is also possible once you get the necessary permits from the local authorities in advance. Ararat became 35th National Park of Turkey with the decision of the Parliament on 1st of November 2004. 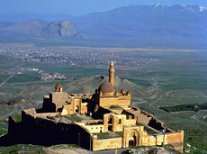 Dogubeyazit town is 95 kilometers east of Agri, comprising spectacular ruins from earlier periods. Ishak Pasha Palace, 6 kilometers outside the town center, is the most important sight. The construction started in 1685 but was completed only 99 years later, in 1784, by the Ottoman governor of Cildir, Ishak Pasha and his son Mehmet Pasha. Originally the palace had 116 rooms and was equipped with a heating system and suege. It was restored many times during the years and has become an original building of mixed architectural design. An Urartian king relief and a rock tomb dating to the 9th century BC are other historical remains near the palace, while ruins from the same period can also be found near Patnos, another important town of Agri province.

The Meteor hole is an interesting sight located between the Gürbulak border gate and Sancavus village. It is about 80 years old and is the second largest hole of this type in the world having 35 meters width and 60 meters depth (115 by 197 feet).

Besides these tourist attractions there are other specialties in the province. One is "Lake Balik", famous for its trout. Located at 18 kilometers north-east of Taslicay village and at 2,250 meters above sea level, it's the largest lake in Turkey at this high altitudes. The lake is completely frozen during winter months.

The local dessert of "Asure", also known as "Noah's Pudding" is one of the best examples in the Turkish cuisine.

Bubi Mountain skiing area is 18 kilometers to the city center but it isn't developed much as a big resort yet. Its season is between December and April and it usually gets approximately 1-2 meters of snow. Another skiing area is 4 kilometers to Eleskirt district with detachable chair telesiege. The skiing track is 1,200 meters long and 250 meters wide.

Diyadin thermal baths are about 60 kilometers from the city center where people go for the cures of rheumatism, skin deseases, bone problems and so on.