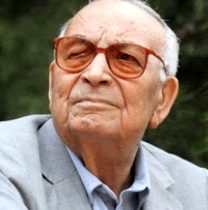 Yasar Kemal was one of the most renowned Turkish writers and novelists of 20th century. He was born in 1923 in today's Osmaniye province and died in 2015 in Istanbul. He lost one eye by accident during his childhood. Yasar Kemal came from Kurdish origins, he had a very tough life due to economic problems hence he had to work in almost any job he could find until his twenties, and he even spent some short time in prison for his communist political views during those days.

In 1952 Yasar Kemal married Thilda, a Jewish lady in Istanbul. He started to work in a newspaper in 1950's and entered into politics in the 60's. After the military coup of 1971 he traveled abroad for many years to live and attend various conferences. During all these years Yasar Kemal won many prizes, doctorates, and international awards. He also received Legion d'Honneur from French president Mitterrand in 1984.

His first work was a poem called "Seyhan" written in 1939 and published in a local magazine, followed by many others. After 1946 he leaned towards writing novels. He was influenced by Iliad and Odyssey of Homeros, as well as writers such as Lev Tolstoy, Anton Chekhov, Dostoyevsky, Stendhal and John Steinbeck. Nine of his novels were made into films and he is credited for re-establishing Turkish as a literary language.