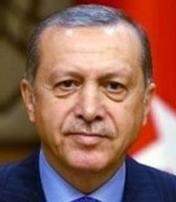 Recep Tayyip Erdogan was born on 26th of February 1954 in Istanbul and completed his education in the same city. Starting from teenage years he was interested in politics and business. He was also a professional soccer player at his youth. Erdogan was 15 years of age when he attended his political party's youth branch.

His success as a party chairman in Istanbul made him elected as the Mayor of the city in 1994. While he was the city chairman of former Welfare Party (RP) in Istanbul, he had developed a new form of organization and had carried it out to the municipal management. His projects for the development and his determination to follow the tasks to be done, made him successful in municipal management. By that, he brought new concepts and methods to the political structural system. He tried to solve many complex infrastructure problems in the municipality between 1994-1998.

In 1998 he was banned by Turkish Superior Election Board (YSK) from holding any public office on account of his prior conviction for "inciting religious hatred" among the masses, and spent four months in prison. After his political ban ended, he re-entered the politics and in 2003 he became the Prime Minister of Turkey as the leader of Justice and Development Party (AKP).

On 12th of June 2011, Tayyip Erdogan and his AK party won the parliamentary elections again for the third time and he formed the Government.

The first public election for the President of the Republic was held on 10th of August 2014 and Recep Tayyip Erdogan won the presidential elections with 51% of total votes. He sworn in on August 28th and became the 12th President of Turkey. Then next presidential and parliamentary elections were on 24th of June 2018 where Erdogan received 52% of the presidential votes. But this time he had more powers as the Constitution was changed earlier by a Referandum, so he formed his own governing Cabinet.

Erdogan had to deal with the Coup d'Etat tentative of 15-16 July 2016 when a small faction of the army have rebelled against him and the Government. After the Referendum on 16th of April 2017, the Constitution was modified thus the President could become a member of a political party, so he became the leader of AKP again.

He is married and has two sons and two daughters.