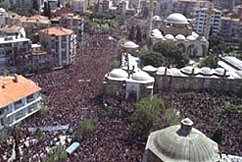 Manisa is an attractive, modern city with a far-reaching past in the Aegean region of Anatolia. Its history goes back to 500 BC but the first known settlements date back to the 14th century BC.

Since the great Ottoman Sultans chose Manisa as the training ground for crown princes, there are many examples of Ottoman architecture, as well as Seljuk. The Sultan Mosque of the 16th century was built for Ayse Sultan, mother of Suleyman the Magnificent. In her honor, the Mesir Macunu Festival (Spiced Candy which is supposed to restore health, youth and potency, called as "Turkish Viagra" as well) is held every year towards the end of March or April, in the grounds of this mosque.

The Muradiye Mosque of the 16th century was built by the great architect Sinan, and the Murad Bey Medresse now houses the Archaeological Museum of Manisa.

Manisa celebrates the annual Vintage Festival every September, when bringing in the fruits of the vineyards is celebrated with excitement. The vineyards surround the city and provide dry fruit for export from Izmir port and grapes for wine making. 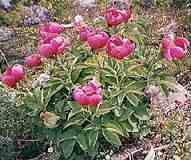 The Spil Mountain National Park is a cool spot with a richly forested area, hot springs and a profusion of flowers, especially wild tulips known as Anemon. There are about 120 kinds of endemic plants here. You may go mountaineering or camping in this area as well as seeing the famous "crying rock" of Niobe, and the carving of Goddess Cybele.

Sardis, in Salihli, is one of the most remarkable sightseeing areas of Turkey. It is the ancient capital of Lydia, once ruled by King Croesus, who was the first one to use silver and golden coinage in exchange for goods. Since Sardis encountered earthquakes, most of the remains date back only to Roman times. There are the remains of the temple of Artemis and a restored gymnasium, exhibiting of the past splendor of this ancient city. The splendid Synagogue from the 3rd century is worth visiting, with its elaborate mosaics and artfully carved colored-stone panels. Sardis was also one of the Seven Churches of the Revelation of St. John.

At Sindelli village there are the fossil foot prints of mankind, belonging to the period of 50-25th century BC.

Traditional houses at Kula are beautiful examples of the Ottoman architecture. Yunt Dagi, Gordes, Kula and Demirci are famous for their precious carpets and kilims. In addition there are many thermal springs throughout the area.