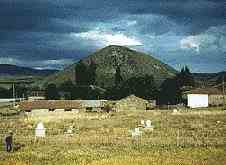 Gordium was probably the capital of Meshech. It was located where the Royal Road of Persian Kings crossed the Sangarius (Sakarya) River. Thus it was an active commercial center. A reference to Meshech's trade in slaves and bronze occurs in Old Testament Ezekiel 27:13.

Excavations in the last fifty years indicate that it was occupied as early as the third millennium BC. Between 2000 and 1200 BC the city was an important Hittite outpost with Assyrian colonists also living there, this parallels the situation in Kanesh (Kayseri) at the same time. The city became even more active when Phrygians settled there beginning in the 9th century BC; it reached its highest prosperity under them in the 8th century BC. By 690 Cimmerians had invaded the area and destroyed the city. Lydians repaired the city, but in 547-546 BC Cyrus and his army destroyed it again. Under the Persians, however, it regained its place as a commercial and military center. Alexander the Great in 333 BC cut the famous Gordian knot and took the city from the Persians, but then in 278 BC it was destroyed by the Gauls. By 200 AD the city was completely deserted. 17th and 16th century BC Hittite graves have been excavated and some of their contents are to be seen at the Anatolian Civilizations Museum in Ankara.

In Gordium itself there are almost a hundred tumulus graves of notables who lived and died between Phrygian and Galatians times. These stand out above the gently rolling landscape. The largest tumulus has been identified as that belonging to King Midas. It still contains some wooden furniture probably from his palace. Most of the finds from the tumuli are in the Ankara museum for safe-keeping, such as furniture decorated with ivory inlay (from pre-Cimmerian times), wooden statues, vases, bronze cauldrons, silver and gold jewelry, and images of Cybele (Mother Goddess) used in religious ceremonies. In the Phrygian palaces and public buildings are the earliest examples known in Anatolia of decorative geometric patterns made with colored pebbles. The mosaic technique suggests that the artists may have been familiar with weaving or with basketry.