The last full solar eclipse of the second millennium occurred on August 11, 1999. Central Anatolia was one of the best places from which to view the celestial event. Times according to Kandilli Observatory of Istanbul Bogazici University for the last total eclipse of the Millennium are below.

Another Total Solar Eclipse in Turkey occurred on 29th of March 2006, Wednesday. Duration of the centerline was 3:48, and local times at cities were: 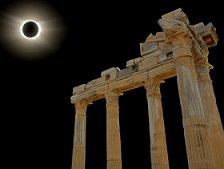 Witness one of nature's most dramatic sights: a total eclipse of the sun. Experience the drama of the sun rapidly disappearing behind the disc of the moon with the amazing progression of events. You will experience the drop in temperature as the sun disappears, and possibly see Bailey's beads, sunlight passing through the valleys of the moon. Watch for the solar corona and solar prominences which become visible only during totality. We may even see a few planets and stars before the first bright burst of sun known as the diamond ring signals the end of totality and a rapid return to daylight. Next Total Solar Eclipse in Turkey will occur on 30th of April, 2060 !!!

Partial Eclipse: This is the most common eclipse where only a portion of the sun's disk is covered by the moon. This is also how the eclipse appears outside of the area of complete shadow (the umbra) during a total eclipse.

Annular Eclipse: When the moon is farther from the earth, the relative size of the moon appears to be smaller than the sun, allowing a small rim of sun to shine all the way around the disk of the moon. This is the rarest kind of eclipse.

Total Solar Eclipse: Because the moon is 400 times smaller than the sun, and the sun is 400 times farther from the earth, the relative size appears to be the same. When this happens the moon is able to completely cover the sun, giving us the magic of a total solar eclipse. Only during totality is the sun's fainter corona visible to the naked eye. This is the only kind of eclipse that is safe to view without special filters.