Aksaray is a province near Cappadocia, in the Central Anatolian region. The province has many things to show in addition to wonderful surroundings. There are important historical buildings from Seljuk times, mostly from the 14th century, such as the Ulu Mosque and the Kizil (Egri) Minaret. The brickwork of the Kizil Minaret is elaborate. The Sultanhan caravanserai built by the Seljuk Sultan Alaeddin Keykubad I is well-preserved, and the Agzikarahan caravanserai is the second important and famous monument from the Seljuk period, both built on the Silk Road. 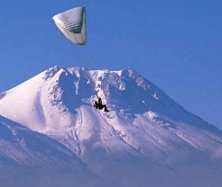 Aksaray is very close to the most frequently visited areas of Cappadocia, all of them on display to show natural beauties mingled with the mysticism of history. Viransehir (Nora), which was the military center of Byzantines and Romans because of its strategic position, carries historical remains from their times. Ihlara is a 14 kilometers (9 miles) long fascinating canyon, formed by the Melendiz River. In this valley there are several Byzantine rock chapels used by the early Christians, similar to the ones at Göreme valley, cut into the canyon walls and decorated with frescoes. From these chapels the Agacalti (Daniel) Church, the Yilanli (Apocalypse) Church, the Sümbüllü (Hyacinth) Church, the Purenliseki Church, and St. Georges Church are the most interesting ones. In the Güzelyurt valley, there are dwellings from the prehistoric periods and they are in an underground city form. In addition there are chapels and buildings carved into the rock. The Manastir valley, and the Sivisli Church which is one of the most interesting churches in the area, are the other attractive places.

One of the most spectacular views in Aksaray is the Hasan mountain, an ancient volcano, rising from the flatlands of Anatolia and touching some 3,200 meters (10,500 feet). It is a great spot for mountain sports fans such as climbers and trekkers.

Accompanying these you will also find guest houses, restaurants and good hotels in the region. Many tours for Cappadocia drive by Aksaray, visiting some of these sights.