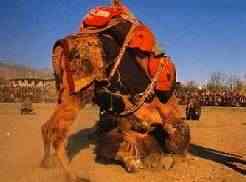 While the Spanish have bullfights, and the Italians cockfights, and the English go hunting with hounds, the Turks have camel wrestling. Today camel wrestling is mostly restricted to the Aegean region and some in the Mediterranean, though it was once more widespread in Anatolia. In the winter you will see elaborately saddled camels being paraded through the villages with the owner extolling just how his camel is going to make mince-meat of anyone rash enough to challenge his beast. The camels are all fully grown bulls specially fed to increase their bulk further, and the sight of them wrestling one another would seem to promise some spectacular action.

In reality it doesn't happen and camel wrestling is more akin to comedy than to blood-sport. Bull camels normally wrestle and butt one another in a knock-out contest for precedence in a herd, and more importantly, precedence in mating. In the arena two bulls are led out and then a young cow is paraded around to get them excited. It's very easy to know when a bull is excited as streams of viscous milky saliva issue from his mouth and nostrils. Mostly the two bulls will half-heartedly butt each other and lean on the other until one of them gives in and runs away. This is the really exciting bit as the bull will often charge off towards the crowd, with the conquering bull in pursuit, and the spectators must scramble hurriedly out of the way. The antics of spectators trying to avoid a thousand kilograms (nearly a ton) of camel running towards them can lead to pure comedy and is the best part of camel wrestling. Miraculously there are few accidents. Occasionally two bulls will get down to it and actually try to wrestle one another, feinting in here and there, eventually locking a fore-leg inside the leg of the opposition and leaning on him to topple him over in a dromedary's version of a wrestling fall and pin.

The sport is a declining one as the cost of keeping, feeding and training a camel solely for competition doesn't come cheaply, and only a rich man can afford to do it. Large bets are wagered by owners and spectators alike, though how you tell just which camel won can be difficult to determine. What happens when they both run away? - it happens. It's worth going once just to see and it's quite nice to know that there isn't a lot of blood and gore involved in this traditional sport, it's really quite gentle considering the size of these huge animals.

Today, there is a "Camel Wrestling League" organized between November and March every year in the Aegean region and the Mediterranean region, in western and southern Anatolia. Below is a list of towns and villages where these matches are usually held: