Some people believe that Santa Claus did not exist but truth is that old Father Christmas did in fact exist as a historic personality. He did not come from beyond the North Pole where Reindeers roam, but lived under the warm Lycian sun as Bishop of Myra. His church and ex-tomb continue to exist as places of pilgrimage in the Turkish town of Demre, known also as Kale, west of Antalya.

Saint Nicholas was born in Patara, was elected bishop during Diocletian's persecutions, and died in Myra around the year 350. This stories of his charitable acts took on legendary dimensions during the following centuries.

One of these stories concerned three boys who were hacked into pieces by a greedy butcher, who salted and pickled them for sale in his shop. Nicholas miraculously restored the boys to life. On another occasion, on hearing that the daughters of a poor Myran could not marry for lack of a dowry, Nicholas stole under the man's window at night and left a bag of gold for each girl. This act earned him the reputation of secretly delivering gifts in the black of night. 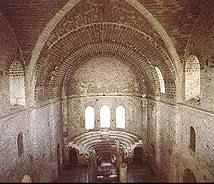 By the 10th century Nicholas had become the most popular folk saint in the Byzantine realm, counting as the patron of children, poor virgins, innocent prisoners, sailors and Russians. His tomb in Myra became the object of pilgrimages. A church was built around it in the 6th century. After it was destroyed in an Arab raid, the church was rebuilt in its present form with the help of Constantine IX and Empress Zoe in 1043.

The fame of St. Nicholas was brought to the west by Teophano, a Byzantine princess who married Otto II of Germany. In 1087 some Italian merchants broke into the tomb and removed the bones of Santa Claus to Bari, where the famous church of San Nicola di Bari was built. Miraculously, enough other bones were found in Myra and transferred to the Antalya Museum.

The Church of St. Nicholas fell into disuse in Turkish times. In 1862 Czar Alexander I bought the edifice and began restoring it. Further restorations were carried out in recent years by the Turkish government, which also promoted the annual festivities which take place on the saint's feast day. Thousands of pilgrims from Italy, Greece and other countries come to Demre each year on December. Byzantine scholars and church historians meet to discuss the life and deeds of Santa Claus. Unfortunately there is no resident Christian community in town today, so the Greek Orthodox Bishop of Myra holds office in Istanbul.

Today Demre is an important agricultural town on the Mediterranean coast of Anatolia. Around Demre there are also ruins of Andriake on Çayagzi beach and Kekova sunken city, Simena and Teimussa which are accessible by a short boat ride or by car.