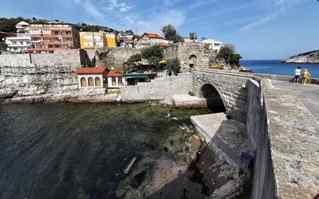 Amasra is a lovely fishermen town along the Black Sea coast, in Bartin province of Turkey. It's also famous for its sandy beaches and natural setting, as well as fish and special local salad. Recently it became a popular tourist town especially for Turkish people where they come to eat fish in many local restaurants, swim, take a daily boat trip, wonder in narrow streets and enjoy a pleasant day, or shop for wooden souvenirs in its bazaar street.

Old name of the town was Amastris, as mentioned by Strabo and Pliny the younger. Meanwhile Homer mentions it as Sesamus or Cromna. It was located in the ancient region of Paphlagonia. During the ages the town was ruled by the Amazons, Kingdom of Pontus, Romans, and Byzantines, during which it was sacked by the Rus during the First Russo-Byzantine War in the 830's. In the 13th century Amasra was captured by the Seljuks. In 1261 the Genovese dominated the town in order to control the sea trade in the Black Sea until 1460 when the Ottoman Sultan Mehmed II conquered the whole Anatolian shores.

Amasra has two small islands: Büyük ada (Big Island) and Tavşan adasi (Rabbit Island). On Rabbit Island there are some ruins which are believed to be from a Byzantine church, but no scientific excavations have been carried out yet. The island is not open to visitors anyways.

Amasra Castle was built during the Roman period but the walls are from the Byzantines and the Genoese. There is an archaeological museum with remains of amphoras, tomb steles, statues, weapons and coins from Hellenistic, Roman, Byzantine and Genovese periods. Fatih mosque was converted from a Byzantine church dating to the 9th century AD, after Ottomans conquered Amasra in 1460. The church narthex section consists of three parts.

Just outside of the town there is Bird's Rock road monument which was created between AD 41-54 by Gaius Julius Aquila, the governor of Bithynia back then.