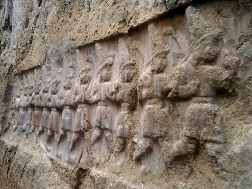 Yazilikaya is located at 2 kilometers from Bogazkale, in Corum province of Central Anatolia. The name of the ancient Hittite site means "Inscribed Rock" in Turkish, and it is a fascinating place not to be missed while you're visiting Hattusas.

Being the most famous of the Hittite rock monuments, Yazilikaya is made up of two galleries, in front of which lies an interesting open-air pantheon. Fine relieves of Hittite gods and goddesses adorn the walls, carved into the native rock, dating back to the 13th century BC. In the larger gallery there are 63 figures carved on the rocks; gods lined up on the western wall and goddesses on the eastern wall, and in between you can notice the most important figures: god of air Teshub and goddess Hepat with her son Sharruma behind her. The names of the gods are inscribed in hieroglyphics over their heads, and a relief of a Hittite king, Tuthalia IV, dressed as a priest, is of particular interest among well-preserved ruins.

Near Yazilikaya you can visit other interesting Hittite sites such as Hattusas and Alacahoyuk.