While both Chinese and Indians claim that they first discovered the use and drink of Tea thousands of years ago, Turks evolved their own way of making and drinking the black tea (Çay in Turkish or Camellia Sinensis in Latin), which became a way of life for our culture. Wherever you go in Turkey, tea or coffee will be offered as a sign of friendship and hospitality, anywhere and any time, before or after any meal. 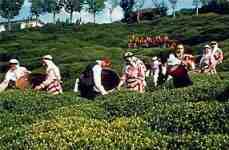 The production of tea in Turkey mainly started in the early years of the Republic along the eastern Black Sea Region. Many of the tea plantations are centered around the town of Rize, and from the Georgian border to Trabzon, Arakli, Karadere and Fatsa (near Ordu), reaching in some places 30 kilometers inland and reaching the height of around 1000 meters (3281 feet). In 1947 the first tea factory was built in Rize and in 1965 the production of dried tea reached to the level of domestic consumption. The tasks of buying, processing and selling tea was conducted by the Tekel (Monopoly of State) General Directorate until then, in 1971 was transferred to the Tea Corporation, and in 1984 the Monopoly on tea was lifted and this facility was also provided to the private sector. 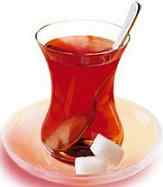 Turkish tea is full-flavored and too strong to be served in large cups thus it's always offered in small tulip-shaped glasses which you have to hold by the rim to save your fingertips from burning because it's served boiling hot. You can add sugar in it but no milk, and you can have it either lighter (weaker) or darker (stronger) depending on your taste because Turkish tea is made by pouring some very strong tea into the glass, then cutting it with water to the desired strength. Serious tea-drinker Turks usually go to a coffee & tea house where they serve it with a samovar (Semaver in Turkish) so they can refill their glasses themselves as much as they want.

A few years ago apple tea (Elma çayi in Turkish) was introduced to the local market, especially for tourists. Of course this has nothing to do with traditional Turkish Black Tea; it's sweet, caffeine-free, slightly tart, with a mild apple flavor. But interestingly the list of ingredients doesn't mention anything regarding apple; only sugar, citric acid, citrate, food essence and vitamin C.

How to make good Turkish tea

Production of Turkish tea is carried out in a campaign of 6 months between May and October which offers the best climate. It's produced with no chemicals and no chemical additives.

In the total production of tea in the World

In the total consumption of tea in the world

In the per capita consumption of tea in the world