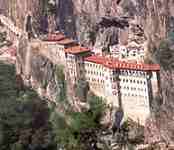 Situated in a very beautiful and natural setting on the slopes of the Zigana Mountains, Sumela Monastery built in the 14th century is nestled into the side of rocks in a famous valley in Maçka district, only 50 kilometers away from Trabzon. The setting is 1,200 meters above the sea level.

Two Greek monks, Barnaby and Sophronios, started to build the original building in the 4th century. The 7th century Icon of Virgin Mary apparently painted by an anonymous Trabizond (Trabzon) artist became the symbol of the monastery. The monastery fell into ruin several times and was restored by Byzantine emperors. After the 15th century the area was ruled by Ottoman Empire but it preserved its rights and privileges until today, now becoming a popular tourist destination in Eastern Black Sea region.

Some say that the name "Sumela" comes from the Greek word "melas" which means "black" and it refers to the characteristic dark color of this icon. But others say that "Melas is the name of the mountain above the monastery, "sou" in the Pontian Greek dialect means "at the", so Sumela (Sou + Mela) means "at the Melas (mountain).

The Greek Orthodox church of the Assumption of the Virgin Mary (Panagia) and the large monastery complex had 5 floors and a total of 72 rooms. The upper floor was used as a gallery and a lookout post. The whole building was full of frescoes and the wall paintings. The large part of the building was hewn out of the rock. It stands in front of a beautiful valley scenery and sharp rocky mountains behind.

Today there is a tiny road to the Monastery which you can walk uphill or take a van, after which you have to walk a steep path and climb some steps to reach the building. After extensive restorations, the monastery was re-opened to public in 2020 and then in July 2021, but due to ongoing restorations and geological studies on site, few sections of the monastery might still be closed to visitors.