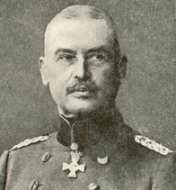 Liman von Sanders was born in Stolp (todays Slupsk in Poland), on the 17th of February 1855. He became an officer of Essen Guards Unit in 1874 and became a general in 1911. He served in divisional commands in German Army before appointed as the head of the German military mission to the Ottoman Empire in 1913 and becoming Inspector General of the Turkish Army in January 1914, in order to reorganize the Ottoman Army after the Balkan Wars. This caused a diplomatic crisis between Germany and Russia then.

Liman von Sanders became the commander of the Turkish 1st Army. In March 1915 he was replaced by Baron von der Goltz and sent to the Dardanelles (near Canakkale) with the 5th Army. He and Mustafa Kemal acquired a great victory with the Allied defeat at Gallipoli. After Gallipoli, Liman von Sanders returned to Istanbul on 19 February 1916 as chief of the military mission to Turkey.

In February 1918 Liman von Sanders took supreme command of the Turkish-German Army on the Palestine Front but was defeated by General Edmund Allenby, and had to leave the command to Mustafa Kemal. After the Armistice of Montreux (30th of October 1918), Sanders was arrested by the British as a war criminal but was released in August 1919. He worked in organizing the return of the defeated German soldiers back to their country, and passed last years of his life writing his memories. He died on the 22nd of August 1929 in Munich at the age of 74.