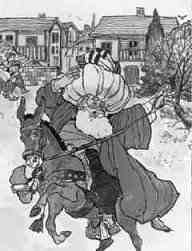 Nasreddin Hoca was born in 1208 in Hortu village near town Sivrihisar (in Afyon province) in the west part of Central Anatolia. He moved to Aksehir town in 1237 to study under notably scholars of the time such as Seyid Mahmud Hayrani and Seyid Haci Ibrahim. He served as Kadi (Muslim judge) from time to time until his death in 1284.

Nasreddin Hoca was a philosopher, wise, witty man with a good sense of humor. His stories have been told almost everywhere in the world, spread among the tribes of Turkic World and into Persian, Arabian, African and along the Silk Road to China and India cultures, later also to Europe. Of course, all these stories currently attributed to the Hoca for about 800 years haven't originated from him. Most of them are the product of collective Humor of not only Turks but also other folks in the World.

Nasreddin Hodja, or Hoca which means "teacher" or "religious leader" in Turkish ("c" is pronounced in Turkish like "dj" or like "J" in "John" in English), is known as with different names in the world. Some examples; Turks say "Nasreddin Hoca", Kazakhs "Koja Nasreddin", Greeks "Hoja Nasreddin", Azerbaijanis and Iranians "Molla or Mulla Nasreddin", Arabs "Juha", and Tajiks "Mushfiqi". And some spellings of Nasreddin are: Nasrudin, Nasr ed-din and Nasr al-din.

The year 1996 was proclaimed "Nasreddin Hoca year" by UNESCO. He signed the humor of the millennium at the top.

Cutting off the branch you are riding on

One day the Hodja was up a tree cutting fire wood. Somebody passing by, noticed he was busily hacking at the very branch he was riding on.

- Be careful, Hodja Effendi! he warned. It is the branch you are riding on that you are trying to cut off. Unless you stop at once, you will certainly come a cropper.

The Hodja didn't bother to answer the man. Busy-bodies were everywhere. Never doing anything useful themselves, they kept telling you what to do, or not to do. While his mind was on this train of thought, down came the Hodja together with the branch he had just managed to severe. His opinion of the man was immediately reversed. Surely this was a man not to be trifled with. In fact, he might be the wisest man he would ever meet in his life. As soon as he got himself disentangled, he ran after the man, but he was too late, for the man had disappeared. Probably that was just as well. Because what he had had in mind was to ask the sage to tell him exactly when he was due to die.

Joking with Nasreddin Hodja by his friends has never ended. One day, some people of Aksehir teases by asking;

- Hodja, it is said that you have an exalted position among Muslim saints. Is it real?
Of course, he had no such a claim but he replies since he was asked once;
- Probably it must be so.
- Such persons prove themselves to everybody by showing their miracles from time to time. So, since you accepted, show a miracle and lets see! asks people.
- All right, lets do a trick, says Hodja and addressing the plane tree in front of him;
- Hello great plane tree, come quickly near me!...
Of course, no tree comes or goes. Hodja walks toward the tree and stays there. The people of Aksehir says;
- Hodja, what happened, you were unable to bring the tree but you went there! as they were laughing at him.
- We aren't haughty, says the Hodja, if a mountain doesn't walk, saint-like person walks.

Help yourself my fur coat

One day the Hodja was invited to a wedding. Having arrived in his shabby, everybody clothing nobody seemed to take any notice of him. Well, this wouldn't do. He bided his chance and slipped out unnoticed. He returned, wearing his best robe and his fine fur coat. From the entrance on he was overwhelmed with compliments, given the best seat at the table and urged to partake of the choicest morsels. Smiling, he began to dip the sleeve of his fur coat into the dishes, saying;

- Help yourself, my fur coat!
- What are you doing, Hodja Effendi? cried the host and some guests in alarm.
- Why, I was just inviting my fur coat to partake of these delicacies, since it seems to command so much respect! A few minutes ago, without my fur coat, I wasn't even noticed. Because of it, I am now being overwhelmed with attentions!.

The Hodja was a poor man but not a miserly one. As a matter of fact, miserly people are never poor. Anyhow, one day the Hodja was going to visit the great Tamerlane. On second thoughts he realized how unseemly it would look for him to go empty handed. No, it wouldn't do... He got a goose beautifully roasted, placed it in a tray and started on his way to the palace. After a while, the aroma of the roasted goose began to tell on him and, when he could bear it no longer, he broke one of it legs off and satisfied his desire. Tamerlane when offered the gift, at once noticed that one of the legs was missing and being lame in one leg himself, he thought this must have been done on purpose to remind him of his disability. He was, of course, furious and the Hodja had never in his life been in greater danger.

- What is the meaning of this? roared the tyrant. Where's the other leg of this goose?
- Your Majesty, all the goose in Aksehir are one-legged, replied the Hodja.
- That's preposterous! I never heard of such nonsense!
- If your Majesty deigns to look out of the window, the geese near the water will vouch for me.

True enough, all these were standing about in the sun on one leg. He ordered an attendant to chase the birds away. They watched the attendant throw a large stick and then the geese running away as fast as both their legs could carry them.

- You see, Nasreddin, you were lying. Those geese proved to have two legs a piece.
- Those poor birds didn't prove a thing, your Majesty. If I were chased away with such a stick, I might grow two more legs myself.