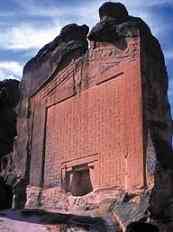 One of the most important settlement centers of the Phrygians, between the 8th and 6th centuries BC, was Midas, situated 66 kilometers (41 miles) south of Eskisehir.

At this place of distant past, stands the ancient city with an acropolis overlooking the lower land. On its northwestern side are two open-air cult temples, carved into the rock, and the most interesting sight in the area. There are rock tombs and Phrygian inscriptions nearby, and a recently discovered underground tunnel which links the site to the valley extending below. The Midas Monument which was built in dedication to Cybele lies to the northwest of the ancient city.

Three tombs in the environs of Midas which are found at Kucuk Yazilikaya, Sutunlu Kale and Doganli Kale are especially remarkable. Kumbet and Deveboynu are other towns close to Midas, and visitors can enjoy the Phrygian monuments spread over these neighboring lands.

Midas site is not to be confused with King Midas.