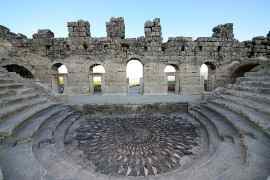 Today, the ancient site of Kibyra is located in Golhisar town in the Mediterranean region, approximately 120 km to Burdur city center, 100 km to Denizli province, and 135 km from Antalya. The site is so huge and so impressive that in 2016 it's submitted to UNESCO World Heritage Tentative List.

The meaning of Kibyra is not known but it's suggested to be of Luwian origin, an old Anatolian language from the Late Bronze Age, and later was modified to Hellenic language. Herodotus tells that the region was called Kabalia. Strabo mentions that the inhabitants were originally Lydians who emigrated to the region of Kabalis to settle about 18 km away from today's site during Early Iron Age (8th century BC), and later in the 4th or 3rd century BC they founded the city of Kibyra. Being located in the crossroads of cultural and trading routes of Phrygia, Pisidia, Caria and Lycia, Kibyra's economy was extremely developed. Strabo also tells that there was a powerful army and justice system which helped Kibyra's growth, they developed iron and leather industry and horse breeding too.

First surveys of the site were done in 1988 but scientific excavations started in 2006 and until today it exposed the Stadion, Odeon - Bouleuterion, Agora, Roman Bath Complex, Gymnasion, Theater, Memorial Tomb and Necropolis which are preserved in very good condition. Most of the remainings that can be seen today are from the Roman period. The city was remarkably destroyed by two major earthquakes in 23 AD and 417 AD and was restored each time. Kibyra was abandoned in the 8th century AD and people settled in the present-day Golhisar town.

After entering the site you can follow the ancient road all the way to the monumental arch, with necropolis area and sarcophagus on both sides of the road. Passed the Monumental Arch you'll notice public buildings on the main hill, meanwhile on the slopes of the main hill there are Roman villas with peristyle courtyards with a great view of the landscape. The streets have water distribution network and sewerage system made by terracotta pipes.

The Agora has a colonnaded street with shops, connecting to the street with a monumental portal with lion and winged human motifs. A gameboard of the 2nd century AD incised on a marble block was also discovered in the Agora.

The Odeon, or Bouleuterion (Town Hall), is one of the most impressive and well-preserved buildings to be found in Anatolia with a capacity of 3600 seats. It served as the judicial court and concert hall serving the region, it was heated and was covered with a wooden roof. There is a beautiful Medusa mosaic on its orchestra section and the intact 540 m2 mosaic pavement in front of the building, which is the largest and completely preserved Anatolian mosaic exhibited in its original place.

The Stadion, where sports events and gladiator fights were organized during the Roman period, had a U-shape with a monumental portico and 195 meters long with around 10-12 thousand capacity. It's one of the largest and best-preserved stadiums in Anatolia. There was also a section reserved for the protocol in the middle of the seats.

The theater had at least 5 thousand people capacity which suggests us that Kibyra had an important role in the area and regional festivals were organized.

Artifacts found during the excavations of Kibyra can be seen at Burdur museum.