Turkey's largest and most magnificent railway station, Haydarpasa was built in the early 20th century by the German architects Otto Ritter and Helmuth Cuno. A monument to the close Turkish - German relations of the time, the station is in neo-renaissance style and has a U-plan. The inauguration ceremony took place on 19 August 1908, just after the proclamation of the Second Constitution. 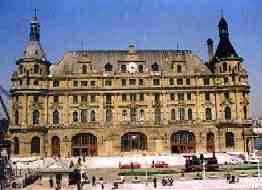 The façade is covered in textured sandstone, and the main facade overlooking Kadikoy Bay rests on a foundation of 1100 timber piles. The steep pitched roof is slated, and the interior is decorated with trailing foliage cartouches and garlands, and stained glass window. The ceiling of the circular room at the base of the southeast tower has ribbed vaults, and the upper landings have groin vaults. Flights of marble steps lead up from the quay to the monumental facade flanked by circular turrets with conical roofs, clock tower rising in the form of a crest at the centre, baroque decoration, balconies, molded cornices, and pilasters.

This splendid station building welcomed those arriving in Istanbul from Anatolia by train, and was the last sight of this enchanting city for those leaving with a mixture of emotions. Since 1908 Haydarpasa Station has witnessed many memorable events, both tragic and joyful. During World War I troops boarded trains for the front from here, many never to return, and in 1917 it was badly damaged in a bomb attack. Exuberant crowds welcomed Mustafa Kemal Atatürk here on many occasions when he arrived from Ankara.

Once upon a time, passengers of the Orient Express arriving at Istanbul from Europe and those who wanted to continue towards Baghdad, had to take a boat across the Bosphorus and board a train from Haydarpasa station.

Although with the increase in road transport and the advent of motorways Haydarpasa Station has lost its former importance, this magnificent building is still a landmark on the Asian shore of the city, together with the nearby Selimiye Barracks (of Florence Nightingale fame) and Haydarpasa Medical School.

Today, the building is under restoration and the station is shut down due to a huge renewing project of the railway lines. They also discovered many archaeological findings during the works.