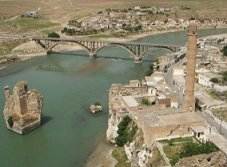 Hasankeyf was the capital of the Artuklu Seljuks in the period between 1102-1232. It is well known for its structure and remains belonging to various Islamic reigns. Remains on both banks of the Tigris (Dicle) river are submerged in 2020 upon the completion of Ilusu Dam nearby Batman province, therefore salvation works were started in 1988 and carried out until the flooding of the site. Although the original founders of the settlement are not known, scholars state that nearby caves were inhabited since prehistoric times. The settlement is cited as "Hesna Kepha" in Syriac sources while it is known as Hisn Kayfa in Arabic which means rock fortress.

Hasankeyf enjoyed a rapid development in the past since it was located at the junction of two historically important routes; the "Silk Road" and the Persian "Royal Road", and also being near an important waterway as the Tigris. Its fortress, built by the Artuklu in the 12th century, is placed on a massive rock 100 meters (328 feet) high from the Tigris river. The Grand (Ulu) Mosque, built in the 14th century is at the top of this hill. The bridge on the Tigris survived to our times with its three pillars. This impressive bridge is known to be 100 meters long. It used to have, on its arches, human relieves holding unidentified objects in their hands as once seen in other bridges in the area such as Malabadi and Cizre. Other important structures in the town include Imam Abdullah Lodge, Zeynel Bey's tomb, Rizk Mosque, Koc Mosque and Eyyubi Tomb.

Other significant places to visit nearby are the tomb of Veysel Karani, a famous Islamic religious thinker, in the province of Siirt, which is a site of pilgrimage for thousands. And the Carsi Mosque.