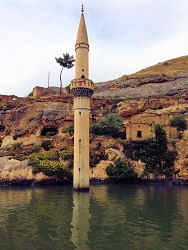 Halfeti is a district of Sanliurfa province. It's one of the most unusual sites in Turkey because the old town is mostly submerged into the water after a dam construction. Even though part of Halfeti is lost underwater, it has a very rich cultural heritage and beauties, like a hidden paradise. Halfeti has also a special type of rose, the Black Rose which also known as the "Crying Arabian Girl" rose. It blossoms in Spring and Autumn.

Today Halfeti is divided into two sections: Old town and New town. The old town, farmers' homes, trees, mosque etc remained under water when Birecik Dam was completed on Euphrates river in 2000. So, the residents of Halfeti had to build and move to the new town about 15 kilometers (9 miles) away, called as New Halfeti. Meanwhile the submerged - original - town of Halfeti is called today as Old Halfeti.

The foundation of the city dates back to 9th century BC, when it was settled by the Assyrians with the name of Sitamrat. During the Roman period there was a settlement here by the name of Akamai, then changed into Koyla. After the Romans, the Sassanians, Arabs, Umayyads and Abbasids ruled the area between 6th-8th centuries AD. In the 11th century Seljuks and then in the 16th century Ottomans captured the territory.

In 2013 the town became a member of "Citta' Slow", or Slow City, because of its serenity. Citta' Slow is an international title given to small towns with a population less than 50 thousand and it's focused on local development for improving traditions, the cuisine, the nature and other characteristics to help local governments.

The town can be visited by small boats that can be hired along the shore. The most dramatic views of the Old Halfeti when you sail around on the boat are semi-submerged houses made of stone, trees, mosque minarets, remnants of the old castle and palace, and other historical monuments that can be seen over and under the water. You can also enjoy unique views from the 135-meter (443 feet) long suspension bridge over Halfeti Dam Lake.

Around the lake there are small restaurants in which you can taste the local cuisine, especially the Halfeti kebab with eggplants or the Sabut fish grill. You can also enjoy a Turkish tea or coffee in the tea-gardens around the village or at the 200-years-old Kanneci mansion. Some interesting villages to visit in Halfeti are Savasan (or Batikkoy) village, Rumkale, and Beresul. Nearby Halfeti you can also pay a visit to Gaziantep city and Zeugma site.