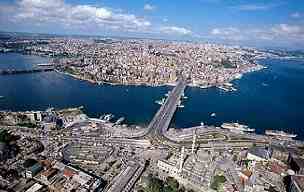 Bridges have a special fascination for people and tend to acquire their own stories and legends. This is true of Istanbul, where bridges have found their way into folklore and become a treasured feature of the urban landscape.

Therefore to treat the Galata Bridge over the Golden Horn merely from the historic angle would be misleading. This bridge has not only been a means of getting from one side of the waterway to the other, but like a fellow citizen has had symbolic and spiritual significance in people's lives. From the end of the 19th century in particular, the bridge has featured in Turkish literature; in theater, poetry and novels. Above all in the latter medium there is hardly a novelist, including Hüseyin Rahmi Gürpinar and Ahmet Rasim, who has not mentioned this bridge.

The oldest recorded bridge in Istanbul was built over the Golden Horn in 1453 during the Turkish siege of the city. In the years 1502-1503 plans to construct a permanent bridge here were discussed, and with this object a design sketch was made by Leonardo da Vinci showing a single span bridge with double pillars at either end, 350 meters long and 24 meters wide (1148 x 79 feet). However, technical drawbacks made it impossible to realize this project, and another Italian artist, Michelangelo was invited to design a bridge for Istanbul. Michelangelo rejected the proposal and the idea of building a bridge here was shelved until the 19th century. In the early 19th century Sultan Mahmut II (1808-1839) had a bridge built at some distance up the waterway between Azapkapi and Unkapani. This bridge, known as the Hayratiye, was opened on 3rd of September 1836. The project was carried out by Deputy Lord High Admiral Fevzi Ahmet Pasha using the workers and facilities of the naval arsenal. This bridge was built on linked pontoons and was around 500 to 540 meters (1640-1771 feet) long.

The first Galata Bridge at the mouth of the waterway was constructed in 1845 by the mother of Sultan Abdulmecid and used for 18 years. It was known as the Cisr-i Cedid or New Bridge to distinguish it from the earlier bridge further up the Golden Horn, which became known as the Cisr-i Atik or Old Bridge.

This was replaced by a second wooden bridge in 1863, built by Ethem Pertev Pasha on the orders of Sultan Abdulaziz in readiness for the visit of Napoleon III to the city.

In 1870 a contract was signed with a French company, Forges et Chantiers de la Mediteranée for construction of a third bridge, but the outbreak of war between France and Germany delayed the project, which was given instead to a British firm G. Wells in 1872. This bridge completed in 1875 was 480 meters long and 14 meters wide (1574 x 46 feet) and rested on 24 pontoons. It was built at a cost of 105,000 gold liras. This was used until 1912, when it was pulled upstream to replace the now genuinely old Cisr-i Atik Bridge.

The Galata Bridge was a symbolic link between the traditional city of Istanbul proper, site of the imperial palace and principal religious and secular institutions of the Ottoman Empire, and the districts of Galata, Beyoglu, Sisli and Harbiye where a large proportion of the inhabitants were non-Muslims and where foreign merchants and diplomats lived and worked. In this respect the bridge bonded these two distinctive cultures. As Peyami Safa said in his novel, Fatih-Harbiye, a person who went from Fatih to Harbiye via the bridge set foot in a different civilization and different culture. Apart from its place in fiction, the romantic appearance of the Galata Bridge made it a subject of many paintings and engravings.

All daily city tours in Istanbul include this bridge as it's the passageway to the Old City of Constantinople.