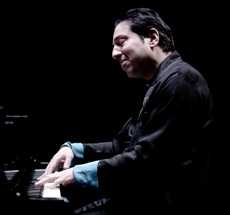 Fazil Say is a world-famous Turkish pianist. He was born on 14th of January 1970 in Ankara. Mr. Say was explored by composer Aribert Reimann during a visit to Ankara in 1986 when 16 year-old Say was playing in the Ankara State Conservatory.

After his extensive education on piano, Say has been commissioned to write music for many classic music festivals and orchestras. His oeuvre includes 4 symphonies, 2 oratorios, various solo concertos and numerous works for piano and chamber music. Fazil Say fine-tuned his skills as a classical pianist with the American pianist David Levine in various cities in Europe, and attended master classes. In 1994 he won the prize at the Young Concert Artists international competition in New York. Since then he played with all of the renowned American and European orchestras and numerous leading conductors, building up a multifaceted repertoire ranging from Bach, through the Viennese Classics (Haydn, Mozart and Beethoven) and the Romantics, right up to contemporary music, including his own piano compositions.

Fazil Say was the piano artist and composer in Residence of many concert houses and orchestras. He also performs chamber music regularly and conducts tours with concerts throughout the World. In 2016 Fazil Say was awarded the International Beethoven Prize for Human Rights, Peace, Freedom, Poverty Reduction and Inclusion, in Bonn. In 2017 he was awarded the Music Prize of the city of Duisburg. In 2018 he was awarded the Gramophone Classical Music Award. He has many other awards from Germany and France too.

Fazil Say is married and has a daughter.