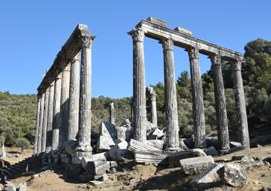 Euromos, located 50 km (31 miles) from Bodrum, was an important city in the ancient times of Caria after the city of Mylasa, today's Milas in Mugla province. Around 5th century BC Euromos was known as Kyramos (or Hyramos), and it means "strong" in Greek. The city was a member of Delian League (also known as Attica - Delos Maritime Union) and it minted its own coins between 2nd century BC and 2nd century AD.

Although most of the site is in ruins today, the 2nd century temple dedicated to Zeus Lepsynos is in great conditions thanks to excavations and restoration work done by Turkish archaeologists in 1970s. The temple was built in Corinthian style columns and capitals in peripteros order, sixteen of them are standing and some with inscriptions in honor of important citizens. The dimensions of the temple was roughly 15 x 27 meters.

A large theater was built against the hill around 3rd century BC, but it's totally ruined today; only few rows of seats can be seen. Also, only few columns of the stoa surrounding the large agora (marketplace) of 95 x 83 meters are scattered in the fields. The city was surrounded by city walls and defense towers, which are also in ruins.

Other sites of interest worth a visit nearby Euromos are Iassos and Labranda.