Erzurum is the largest province in Eastern Anatolia and is located on a high plateau (1950 meters). The province has always been a transportation junction and is now the transfer point for air, rail or bus connections for travelers coming to Eastern Turkey.

The history of the city extends back to 4000 BC and it has seen many civilizations in Anatolia. One of the most important remains from this periods is the well preserved Byzantine city walls. Most of the historical finds are kept in the collections of the Archaeological Museum, which is a part of the Erzurum Museum.

Erzurum was captured and ruled by many different nations like Hurries, Urartus, Cimmerians, Scythians, Medians, Persians, Parthes, Romans, Byzantines, Sassanides, Arabs, Seljuks, Mongols, Ilhanides, Safawides, and of course Turks. The Ottomans captured the city only in 1514 and ruled until the foundation of the modern Turkish Republic by Mustafa Kemal Atatürk in 1923. Some great historical figures like Alexander the Great and Tamerlane can be added to the list of rulers.

The city has always been a point of collision of forces coming from various directions and served as a base of operation. In the 19th century it became the main Ottoman fortress against the Russians who occupied it three times. The resistance against the supreme in powers of the west was initiated with the War of Independence. Atatürk gathered a Congress of National Delegates here on July 23, 1919 where the foundation of national unity and independence were laid down. 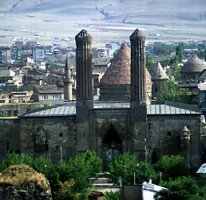 The modern city, with wide tree lined boulevards and university buildings, is intertwined with the historical district. The Seljuk buildings in the town are remarkable. The Ulu (Grand) Mosque built in 1179 is interesting, with its many columns and seven wide naves. Next door to Ulu Mosque is the Cifte Minareli (Double Minaret) Medrese (theological school), which is the most famous feature of the city. It is a perfect example of Seljuk architecture, the carved portal being particularly fine.

Walking south you will see the Three Tombs (Üç Kümbetler). Another interesting tomb is the elegant 13th century Hatuniye Tomb. The Yakutiye Medrese of the 13th century is one of the most important historical monuments of Erzurum with its beautiful portal and richly tiled minaret. Here is an elaborate mosque built by the great architect Sinan in the 16th century, the Lala Mustafa Pasa Mosque. The Aziziye monument commemorating the Turkish - Russian War, the citadel and Bell Tower, the Rüstem Pasa Caravanserai and the Bedesten are other historical places of interest.

For nature lovers, Lake Tortum, 120 kilometers (75 miles) from Erzurum, and Mount Palandoken provide perfect opportunities. Palandöken winter sports and skiing resort which is reached by mountain roads of scenic beauty, is only 6 kilometers (3,7 miles) from Erzurum. This winter sports spot is competitive with those of Europe, and the 2011 Universiade Winter Games will be held at these facilities between January 27th - February 6th. By Lake Tortum you will encounter a rarely found beauty of a peaceful lake. The waterfalls at the northern end of the lake are worth seeing as they plunge from a height of 47 meters (150 feet). Erzurum is a province suitable for mountaineering with peaks of 3000 meters (9,842 feet), and also has many hot springs and meadows.

Jereed is an ancient war-game-like sport and proudly practiced in Erzurum, especially during festivals and weddings.

One of the best meals here is Cag Kebab, which is considered as a traditional meat dish of world famous Turkish Cuisine.

Oltu stone is a specific semi-precious local black stone carved in the area from which various forms of jewelry and rosary beads are made of. You can find most of the Oltu production shops in Tashan old shopping area.