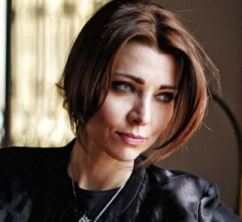 Elif Safak (pronounced as Sha-fak) was born in Strasbourg, France, on 25 October 1971. She is an award-winning novelist, a best-selling author and the most widely read woman writer in Turkey since she first published in 1994. She's also considered as one of the most distinctive voices in contemporary Turkish and world literature.

Safak has published 20 books so far, being the last one "On Dakika Otuzsekiz Saniye" (Ten Minutes Thirtyeight Seconds) in 2019. Her other most famous books are "Bastard of Istanbul", "Honour", "Forty Rules of Love". Her books are translated into 50 different languages. She was awarded the honorary distinction of Chevalier of the Order of Arts and Letters in 2010, the GTF Award for Excellence in Promoting Gender Equality in 2016, the Caravan Award for Peacebuilding Through the Arts in 2017, and many others. Her novel "Askin Kirk Kurali" (Forty Rules of Love) was chosen by BBC among 100 Novels that shaped our World.

Safak writes in both Turkish and English. She blends Western and Eastern traditions of storytelling, bringing out the myriad stories of women, minorities, immigrants, subcultures, youth and global souls. Her work draws on diverse cultures and literary traditions, as well as deep interest in history, philosophy, Sufism, oral culture, and cultural politics.

Safak holds a PhD in political science and she has taught at various universities in Turkey, the US and the UK, including St Anne's College, Oxford University, where she is an honorary fellow.