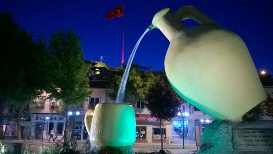 Avanos is set on the banks of the Kizilirmak, the Red River, which gets its name from the clay that it deposits. This clay has provided Avanos with pottery for centuries and the town is still dominated by this industry despite the inroads that tourism has made in the area. The main street has numerous shops and workshops selling plain and decorated pots and plates and you can watch the potters at work using kick wheels, the design of which has remained unchanged for generations in this art form. Many of the workshops will encourage you to have a go yourself, which is harder than it looks.

Avanos is a possible base for exploring Cappadocia with accommodation and services available at reasonable rates. The town has retained some of its charm and is a pleasant place to spend half a day or to stop for lunch. The town has a tourist targeted Hammam (Turkish bath) which is popular with tour groups and is also close to the Selcuk built Saruhan Caravanserai, a restored Han (travelers 'service station'), and the Özkonak Underground city, a smaller version of those at Derinkuyu and Kaymakli. During summer months water sports activities or entertaintment are organized on Kizilirmak river, such as enjoying a ride with Italian style Gongolas or speed boats.

Today Avanos is also famous for its carpets and textile.