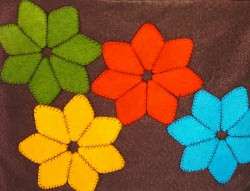 Felt making is one of the oldest crafts which dates back to 5th or 4th century BC, it's maybe the oldest textile known to man. Felt has been used in ancient times especially in Central Asia where the Turks are originated, to make carpets, tents, shoes, hats, saddle bags, sheperds' cloak against cold weather, and so on. There are proofs that Uighurs in Central Asia and the Hittites in Anatolia used felt in their daily life.

There is no sewing or weaving in this process; wool fibres are felted using moisture, friction and heat. When the wool shrinks, the fibres interlock and mat together to make an impenetrable fabric. The normal treatment is either by wet-felting the fibres or dry-felting using special needles. The wool used for felting can be of lamb, sheep, cashmere, angora, and alpaca.

Felt, known as Keçe in Turkish, is produced in many places around the world and of course in Turkey too. For many years during our modern ages the felt business has lost its popularity when textile machines, new textile products, and machine-made rugs have become popular. But lately the young generation, influenced by felt-masters such as Mr. Arif Con in Tire - Izmir and Mr. Mehmet Girgic in Konya, are trying to turn this business alive once again. There are also few felt masters in Afyon, Balikesir, Sanliurfa, Erzurum and Kars provinces. The felt-making remains as an important Turkish art since Turks were in Central Asia.

Today felt makers produce so many variety of goods; shoes, hats, jewellery and accessories, bags, slippers, door mats, decorative objects, felt mural and pictures and many other colorful and fashionable items. They can also combine felt with leather, silk, lace and copper.