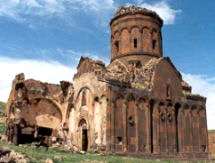 Although the ancient settlement of Ani began as an Armenian settlement and the capital of Bagratuni Kingdom, had endured waves of successive conquerors; Muslims, Byzantines, Mongols, among them. It was not until the Mongol rule of Asia Minor that the city was abandoned. In 1336, the mostly Armenian citizens were forced to leave and Ani was never again inhabited after 17th century.

Among the structures left behind were proto-Gothic-style churches built using local volcanic basalt and that may predate by 150 years Europe's first realization of the form, palaces, crenellated defensive walls, a bridge, even an early post office. For the centuries before its abandonment, the city had been a medieval capital of political, economic, cultural, and architectural importance. The site is vulnerable to earthquakes, harsh weather and winds, vegetation growth etc.

Grants from the Samuel H. Kress Foundation enabled an on-site assessment by experts to take place in order to establish preservation priorities. Funds are being solicited for emergency stabilization. Expert masons and conservators are mobilized for restorations on site.

For many years during the Republic period you needed an official permission to visit Ani because, due to its location right on the Turkish-Armenian border, it was a military zone. Then the ban was lifted and the permit is no longer needed. You can just go to Ani and buy your ticket for entering the archaeological site. Some of the most important structures at the site are the Cathedral, church of Surp Stephanos, church of St Gregory of Tigran Honents, church of the Holy Redeemer, mosque of Manuchihr, the city walls and many others mostly in ruins.